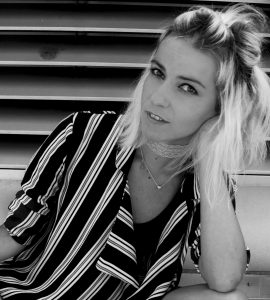 Raytchev’s personal experience and observation of human psyche have been a continuous source of inspiration for her work.  Her paintings and sculpture are bold, at times ironic and feminine yet feminist. Raychev’s work depicts conflicts within, enquires about social stigmas, especially with regards to mental health and equal rights, and promotes honesty and positive message that change is possible. Raytchev invites the public to participate, either via interviewing her subjects or via creating multi media artworks.

Having studied at the world’s most prestigious art and design collages Central St. Martins College of Art and Design and London College of Fashion, Raytchev’s creative talents are not restricted to one type of media.

Raytchev’s work has been getting international attention. Raytchev has participated in various group shows and science conferences around the world (UK, US, Russia). In 2015 during Frieze Art Fair, she held a successful solo exhibition in London’s Notting Hill. Raytchev has been mentioned in numerous national and international press such as the Times, News Week US, Dazed Digital, Huffington Post, Bullet Media as well as appearing and being interviewed on Slovak and Czech National Radios, Women in Trade Magazine and other publications.

One of her most recent achievements was her art chess set ‘Addictions’ that has been exhibited at the World Chess Hall of Fame Museum in the US, along side renowned artists Yoko Ono, Barbara Kruger and Sophie Matisse.

Having dealt successfully with bulimia, and through the insight of addiction that comes with it, she became a passionate advocate of raising awareness about mental health issues.

The context of her ongoing inquiry about the human condition is based on extensive research. Since starting her ‘Progress not Perfection’ project, she has been in conversation with neuroscientists, researchers ad other professionals from mental health field.

In 2015/2016 Raytchev received the Selected Artist Award for Beat charity, that helps people with eating disorders. She is in the process of establishing closer working relationship with NEDA (National Eating Disorders Association) in the US that she supports.

As of late, Raytchev’s work is gaining more of a political and social character. She addresses her ideologies and support for racial, gender and sexual equality as well as various environmental causes. She questions the establishment and the position of women within the society. Same as with her past mental health related works, she continues to encourage equality, acceptance and empowerment of those less fortunate or discriminated.

“This new work is ambitions and exciting’ Barry Martin, artist